Let’s review principles of moving pieces and advacing pawns and apply concepts of evaluating, tactics and strategy. We will cntinue using the standard French Defense after 4 moves. Think about what the players have done so far in in the opening. What are some possibilities open for the players? Why did the players make the moves they did?

Algebraic notation for the above opening is:

One of the 10 Basic Rules covered under Fundamental Concepts is to make developing moves and to advance pawns that also attack and thereby threaten capture of opposing pieces and pawns. Both White and Black have followed that basic principle. However, Black did not follow the basic rule that says to make only one or two pawn moves in the opening, because Black made three of them.

Without going into non-normal moves or advances against the French Defense [for example, White moving his or her h2 pawn to h3] and without trying to visualize moves ahead, you should also see that White’s e4 pawn was advanced to e5 past possible capture by Black’s d5 pawn creating a passed pawn. As noted in the passed pawn section of The pawns, this usually is a powerful factor in the endgame phase of a chess game.

What else do we see in the above diagrammed in the standard French Defense opening?

We see also that Black’s pawn at c5 is attacking White’s pawn at d4. White and Black have created pawn chains – White with d4 & e5, and Black with e6 & d5; and they also constitute pawn couples. We know from the pawn chains tutorial that the weakest link is the rear most pawn as it is the “base of the chain” providing the the initial protection for the chain. Further, we know that from the pawn chains tutorial that attacking the base of a pawn chain is usually a player’s best avenue to break the pawn chain. Therefore, as you may have already deduced, pitched battles may ensue with the opposing player attacking the chain and the player seeking to fend off the attack by concentrating pieces on squares to defend the rear pawn in the chain. This is one of the battles ensuing in the above moves by White and Black in the French Opening.

This battle is an important adjunct to one of the main battles in openings for chess games: to gain control of the center – the four squares at d4, d5, e4, & e5 – which is one of the basic Fundamental Concepts in the game of chess.

There are several aspects to the tactics and strategy being employed by the players in the French Opening (as with any opening). Most notably, Black is attacking to gain control of the center of the board while White fends off the attack to keep control of the center by protecting the d4 and e5 pawns with White’s Knight at f3 and White’s Queen at d1.

Is that all we may say of the the tactics and strategy in the positional structure of the French Defense? Certainly not. Additional other possibilities exist for White.

On White’s third move, White may choose to capture Black’s d5 pawn instead of advancing to e5 (exd5). This is the Exchange Variation of the French Defense and generally considered not a good play by White as Black should be able to gain initiative parity fairly quickly with some smart playing on Black’s part, which generally leads to a tedious game.

White also has the possibility to pin Black’s Knight at c6 by moving his King Bishop from f1 to b5 (Bb5), thereby attacking Black’s Knight which cannot move as it is absolutely pinned because doing so would put Black’s King in check. Black can parry the pin by advancing his a7 pawn to a6 (a6) thereby counterattacking White’s Bishop at b5. White is then faced with a choice…move the Bishop or capture Black’s Knight.

What does White consider in deciding what to do? While this can become quite complex in the French Defense, for now let’s stick with a basic main tactical and strategical point for White to consider.

What is White’s tactical and strategic purpose for threatening and capturing Black’s Knight? If White captures Black’s Knight at c6 Bishop Pair! Yet, White forces Black to lose a tempo to either capture White’s Bishop or block the check on the Black King. Black will simply likely capture White’s Bishop with Black’s pawn at b7 (bxc6)., following the general principle to keep one’s pawns toward the center of the board. Black instead could block the check by moving Black’s Queen Bishop at c8 to d7 (Bd7), counterattacking White’s Bishop.

Why would Black NOT even consider blocking the check with his weaker Queen Bishop? White’s King Bishop simply would capture Black’s pawn at b7 (Bxb7) thereby attacking White’s Rook at a8, forcing Black to waste a tempo to move the Rook! Capture of Black’s Rook at a1 on White’s next move (Bxa1) would be disastrous. Remember the material value of pieces and material count. White would secure a Knight, a pawn, and a Rook, for a Bishop, and Black would go down in material count: 36 (White) to 30 (Black). Notice also that the set of moves would destroy Black’s Queenside, opening up the b file in the process to attack by White. An overwhelming monstrous disadvantage for Black, who would likely and should rightly just simply resign the game at that point.

Instead, White also could trade (exchange) the Bishops (BxB, QxB), but why do that when White could go gobble up a free pawn, threatening capture of Black’s Queen Rook, forcing Black to waste a tempo to move the Rook, going up in points in material count, destroying Black’s Queenside, opening the b file? Perhaps some players might do so for their own tactical and strategical reasons, but certainly it would not be the most logical thing to do.

An important concept to remember is that except for tactical and strategical reasons, and in certain situations involving positional inferiority and/or material advantage, it is always better to remove the other player’s pieces and pawns whenever possible if doing so does not lose you a piece or pawn and presents no detriment such as a threat or mating net! A player’s failure to capture a piece or pawn freely is equated with losing a piece or pawn by the player! A good principle to remember is to: “Take the fine material!” Also, another important concept is that generally it is better to capture a higher value piece with a lower value piece or pawn and lose it to capture in an exchange.

The words “usually,” “normally,” and “generally” have been used repeated, and with good reason. You should now have an appreciation and understanding that the exceptions to the general principles and concepts are as equally important if not more important in the normal course of things during a game. This does not mean to study and think only about the exceptions. You must play chess applying the general principles and concepts with force and vigor. Deviation from them should occur only for sound tactical and strategical purposes! Every player encounters a game where he or she thinks they have things well in hand, only to see things go suddenly and disastrously very, very wrong resulting in a crushing and stunning defeat.

Remember that some value Bishops over Knights (3 1/2 to 2 1/2), and thus would say that usually an exchange of a Bishop for a Knight is not materially advantageous, especially using the stronger Bishop in the exchange. However, as discussed above, for tactical and strategical reasons White may choose to exchange his or her stronger bishop (White’s King Bishop) for Black’s Queen Knight, with sight set firmly on gaining control of the center of the board.

The above hardly covers all the possibilities for playing the French Defense as Black and against it as White. Perhaps you spotted other possibilities. This is not designed to be an exhaustive study of the French Defense, but only to provide basic ways to think about moving pieces and advancing pawns to create threats for the purposes of gaining material advantage and positional superiority. As you study and play chess games, you will become much more attuned to the higher level of thinking – move order and calculation

Can't thank enough Levon for doing this. A must watch watch interview of @LevAronian

#TheKnightSchool has a variety of #OnlineClasses coming up this #Fall that will provide kids with the consistent social and intellectual stimulation that they crave during these crazy and uncertain times! 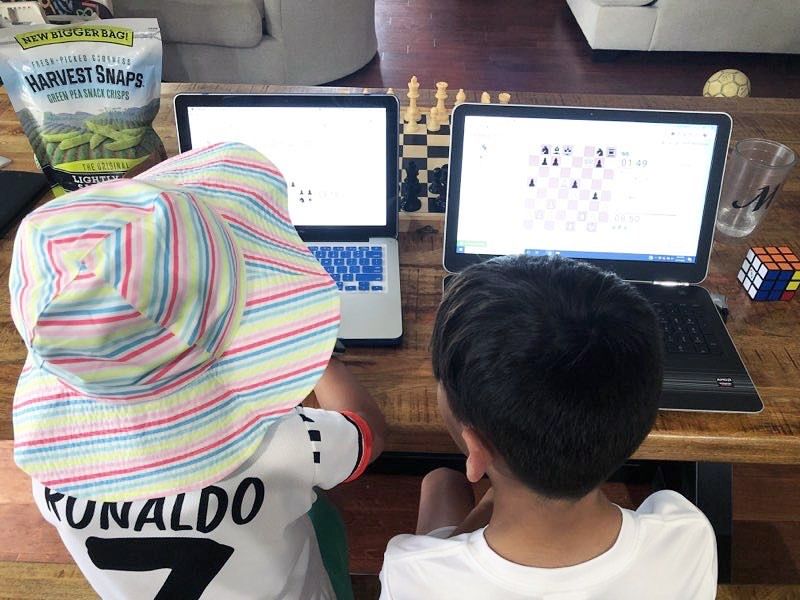