There are various types or methods utilized for chess notation, which is to say how a record is created for a game – moves by pieces and pawn advances, captures, castling, check, double check, checkmate, etc., and for evaluation purposes – excellent move, bad move, blunder, etc. Additionally there are symbols and abbreviations also commonly used in the chess world. The most common notation type you will encounter and the one most frequently in use in the modern chess world is English Algebraic, (note: the United States Chess Federation refers to this system as Algebraic Notation, abbreviated AN), although you will encounter several others as well and should become familiar with them. The types you will see in chess books and publications, in chess programs, and in use in the chess world is quite varied: English Descriptive Notation, Figurine Algebraic (also called Standard Figurine Algebraic), Portable Game Notation (pgn), Forsyth-Edwards Notation (FEN), Numeric for Chess Correspondence (established as official notation system for correspondence chess games organized through The International Correspondence Chess Federation), German Algebraic (with colon for captures), Long Algebraic, Abbreviated Algebraic (without check and capture symbols), and Computer Notation (earlier type not used now). There is also evaluation notation system used in conjunction with mainly pgn files called Numeric Annotation Glyphs (NAG).

In addition to the above, there is a wide range of symbols used in various styles of chess notation.   Click Here to review the Symbols tutorial.

In chess books and publications, as well as computer and Internet chess programs, you will see principally two types of noting moves made during a game regardless of the method of chess notation type used. The first type of noting moves is a straight forward linear notation format across the lines of a page where the number represents the number of the move followed by White’s move and then Black’s move, in a sequential repeating descending order. For example, and using the initial opening moves (pawn advances) by White and Black in setting up the French Defense:

The second type is in a two-column table format shown below:

Although the use of periods after the move number is the preferred style of noting the move numbers, often you may see it written without the periods as well. Additionally, when a period after a move number is used then the use of a space after the period and before the White’s move notation is optional. There is always a space between White’s and Black’s move notations, and in the straight linear format there is always a space between Black’s move notation and the following move number. To continue further using the standard French Defense after four moves by White and Black, English Algebraic notation for a straight linear format would be as follows:

In the two-column format:

A variation on the two-column table format is a multiple column format, where moves in the two-column format are grouped (often for five to ten moves) in column format sequenced in successive columns for each group across the table. The following is an example using the first twenty moves from Reti – Torre, International Tournament of Moscow, 1925. Sometimes the tabled is scrunched into a smaller width table, with the moves noted as if across a page but in a single column format. This variety is shown in Figurine Algebraic (Section III) below.

Through the introductory sections, you should now be acquainted with the basics of the English Algebraic method of chess notation. The following is both a review and further development of principles for English Algebraic notation, as well as review of basic symbols in use. I then provide examples of how you will see various styles for actually noting moves down and displaying them textually in English Algebraic.

English Algebraic notation is based upon assigning numbers to the 8 ranks (rows) and lower case letters to the 8 files (columns) on the board. Reference is made to the squares on the board by their file letter and rank number; e.g., a1, b7, g3, h7 etc. Therefore, each file has 8 squares associated with the file (e.g., for the a file there are a1, a2, a3, a4, a5, a6, a7, and a8). Each rank has 8 squares associated with the rank (e.g., a1, b1, c1, d1, e1, f1, g1, and h1). The phrase “rank and file” should come to mind, although in English Algebraic notation it is more accurately “file and rank”. Additionally, remember that upper case/capital letters are used for the pieces: King = K, Queen = Q, Rook = R, Bishop = B, Knight = N (some languages use S to note the Knight, so keep this in mind; you may see Kt as well although generally in older texts and books as this is obsolete). In English Algebraic notation no letter is used for the pawns, which instead generally are referred to simply by the file letter from which the pawn is advanced. A capture whether by a piece or a pawn is noted by using the multiplication symbol/lower case letter x (e.g. Bxc6, exd5). Note, however, in some languages/notation systems, the ( : ) symbol is used to note a capture (B:e4) [sometimes the : is shown after the move notation instead of in the middle). So for example, in German algebraic notation, a capture would be noted instead as B:c6 and e:d5 using the above two examples].

A.    Basic Rule for Noting Moving Pieces.    A move by a piece not involving a capture is noted by using the upper case/capitalized letter assigned to the piece followed by the lower case letter of the file and the number of the rank of the square to which the piece is moved. An example: if White’s White Bishop is moved from its home square at f8 to the square at b5, this is noted as Bb5.

B.    Basic Rule for Noting Capture by a Piece.    A capture by a piece is noted by using the upper case/capitalized letter assigned to the piece followed by the multiplication symbol/lower case x followed by the lower case letter of the file and the number of the rank of the square to which the piece is moved and does the capture. An example: if White’s White Bishop is moved from it home square at f8 to the square at b5, which has a Black pawn on it and thus White’s Bishop does a capture of that pawn, this is noted as Bxb5.

C.    Special Rules When More than One Piece of the Same Type

May Move to or Move and Capture on a Square.

1.    If two pieces of the same type may move to a square, then the file letter for the file from which the piece is moved is added after the letter for the piece except if the pieces that could move to the square are in the same file. An example is if two Knights are positioned on squares such that they could both move to e4 (e.g., Knights at c3 and g3), and the Knight at c3 is moved to e4 then the notation would be Nce4.

2.    If a capture would occur of an opposing piece or pawn at e4 in such situation, then the multiplication symbol (or lower case x) is added; e.g. Kcxe4.

3.    If the pieces that may move to a square are both in the same file, then instead of adding the file letter use instead the rank number from which the piece is moved. An example is if two Rooks are in the same file and there is a piece or pawn in that file which may be captured by either Rook; e.g., if the two Rooks are in the e file (at e1 and e6) and there is an opposing Knight at e4 and the Rook at e1 is used to move and capture the Knight at e4, then the notation would be R1xe4.

4.    In very rare situations, to adequately note a piece move or piece move and capture a player will need to use the full algebraic notation for his piece…Bc5xd6. These situations are rare and occur after pawn promotion.

D.    Basic Rule for Noting Advancing pawns.    An advance by a pawn not involving a capture is noted by using the lower case letter of the file in which it is advanced and the rank number of the square to which it is moved. An example: if White advances his King pawn at e2 to e4 (a two-square advance), this is noted simply as e4.

E.    Basic Rule for Noting Capture by a pawn.    A capture by a pawn is noted by using the lower case letter of the file from which the pawn is advanced to do the capture followed by the multiplication symbol/lower case x followed by the lower case letter of the file and the number of the rank of the square to which the pawn is advanced and does the capture. An example: if White’s pawn at e4 advances and captures Black’s pawn at d5 (diagonally only fro advancing and capturing with a pawn), this is noted as exd5.

F.    Basic Rule for Noting en passant Capture by a pawn.    An en passant capture by a pawn is noted as if the capture occurred on the square bypassed by the opposing pawn using the lower case letter of the file from which the pawn is advanced to do the capture followed by the multiplication symbol/lower case x followed by the lower case letter of the file and the number of the rank of the square bypassed by the opposing pawn on its two-square advance. An example: if White’s pawn is at e5 and Black advances his or her f7 pawn to f5 bypassing the ability of White’s pawn at e5 to do a normal capture on f6, then if White does the optional en passant capture at f6, this is noted as exf6 (and not exf5 although Black’s pawn at f5 is removed from the board) [remember sometimes an additional notation is added to denote an en passant capture occurred as described above…e.g. exf6 (e.p.)].

G.    Basic Rule for Noting Pawn Promotion.    A pawn promotion is noted by adding to the pawn advance notation an equal sign (=) and the capital letter for the piece selected by the player for the promotion (Queen=Q, Rook=R, Bishop=B, & N=Knight). An example: if White’s pawn in the a file is advanced from a7 to a8 and promoted to a Queen, this is noted as a8=Q. Sometimes you will see parentheses used instead of the equal sign…a8(Q).

The following is the full game in English Algebraic notation for Boleslavsky – Bronstein, Moscow 1945, USSR Championship, which shows many of the above principles for noting a chess game with English Algebraic. The Reti – Torre game (partial example) above also shows an example of using one of the optional additional en passant notations.

This type is the same as English Algebraic except graphic symbols are utilized for the pieces (styles of pieces may vary of course depending on creator’s choice). An example is shown below with the corresponding example in English Algebraic (both in a scrunched table format you might sometimes see used).

The Bishop piece was introduced to the European chess in the 12th century, replacing the elephant of Islamic tradition.

This particular piece is of Scandinavian origin, circa 1150–1200, carved from whale ivory; collection of @metmuseum. 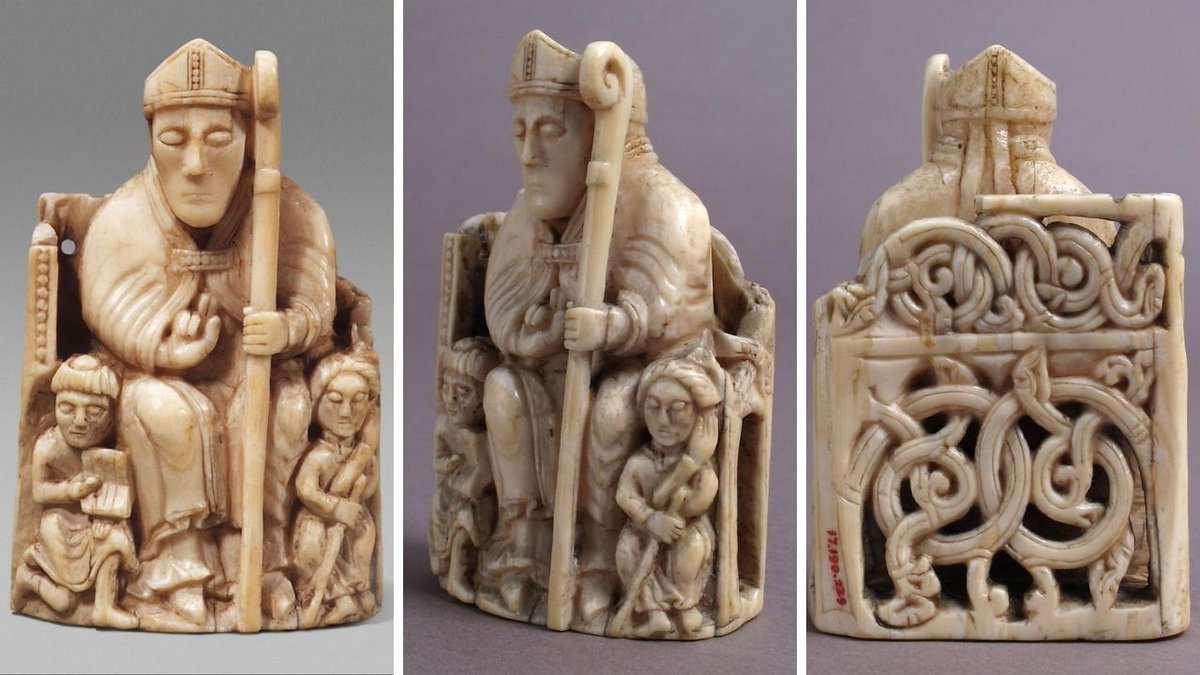