The English Descriptive notation type, while an older notation type and not in use as much anymore, was widely used in chess world. Therefore, you will likely encounter it frequently in books and publications. The notation type is not obsolete and is still used, especially by those who grew up with it and learned it as the primary chess notation type while learning chess.

English Descriptive notation is not an easy system to learn, but once learned is easy to apply when reading the notation. The system is not based on the file-rank coordinate system used in English Algebraic. Instead, the squares are assigned identification labels referenced to the files determined from the King and Queen files for each player, then by reference to the piece which has its home square in the file, and then finally by the rank number calculated from each player’s side of the board. What does that all mean? Well, simply put each square has two notation identification labels assigned to it: one from White’s view of the board (vertically upward) and one from Black’s view of the board (vertically downward).

The ranks are numbered 1 through 8, but from each player’s side of the board instead of just from White’s side of the board as occurs in English Algebraic. For example, in English Algebraic we know the White King starts on e1 in its coordinate system. In English Descriptive, though, that square would be K1 for White (first square vertically upward for White) and K8 for Black (eighth square vertically downward for Black). One way to view this is each square essentially being split in half – with the lower half being White’s side and the upper half being Black’s side for notation purposes. Thus, in the starting board position, in English Descriptive notation for example White’s King Rook (h1 in English Algebraic notation) starts at KR1 (King’s Rook 1), while Black’s King Rook also starts at KR1 (h8 in English Algebraic notation). The diagrams on the next two pages show each square and the two identifications assigned to it. I have included the English Algebraic coordinates for comparison purposes. The tutorial continues after the second diagram.

This diagram shows the squares with the labels assigned from White’s perspective in the normal board orientation, White being at the bottom and Black at the top.

This diagram shows the board flipped with the squares and their labels from Black’s perspective.

In English Descriptive notation, each piece is assigned the same capital letters as used in English Algebraic (in some older texts you might see Kt for Knight which is obsolete, instead of N), but the pawns are assigned the capital letter P. Moves by pieces and advances by pawns are then made by using the capital letter assigned to the piece or pawn, followed by a hyphen (-) and then the identification of the square to which it is moved from the perspective of the player making the move or the pawn advance. The other rules for capture (use of multiplication symbol, the lower case letter x), en passant, check, checkmate, and pawn promotion, as well as the common symbols and notations for evaluation are the same as English Algebraic.

Thus, special indicators that are appended to the move include e.p. (en passant), Ch (Check), Mate (Checkmate), Resign, and Draw. The sequence 0-0 is used for a Kingside castle and 0-0-0 for a Queenside castle.

Typically, the move will record only enough information to make the move unambiguous. A pawn capturing a pawn may be shown as PxP if it is the only one possible, or as BPxP if only one of the player’s Bishop’s Pawns can capture another pawn, or as QBPxP, or PxQBP, or other such variations. You may also see the for example the BPxB convention used.

As a last resort, the location of a capture or the starting point of a move may also be shown, delimited with parentheses or a slash, as BxN/QB6, or R(R3)-Q3. Sometimes only the rank or file is indicated, as R(6)xN.

When listing the moves of a game, first the move number is written, then the move by white followed by the move by black. If there’s no appropriate white move to use (e.g., if the moves are interrupted by commentary) then an ellipses … is used in its place. 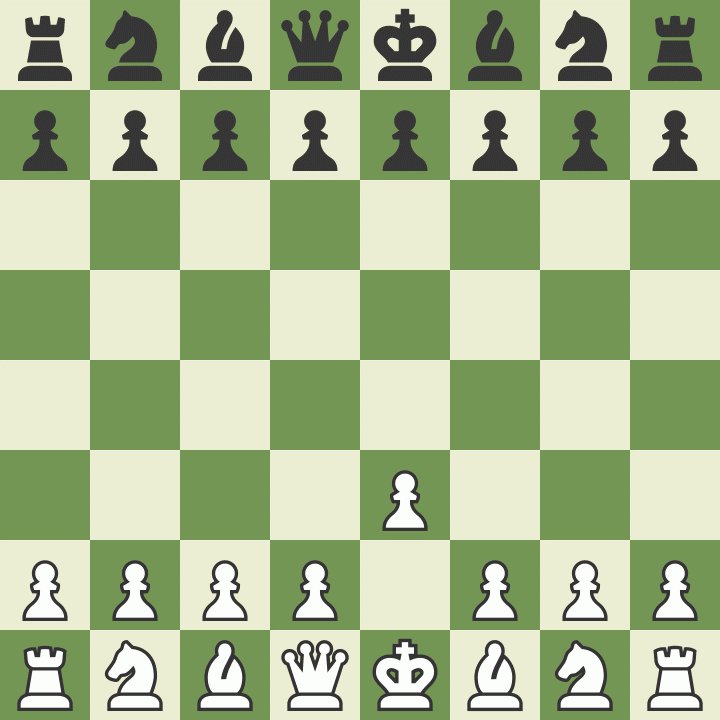