As mentioned earlier, Knights are particularly effective to use for creating forks and fork checks. The setting up of a Knight fork often can almost be hidden from an unwary opponent because of the Knight’s ability to jump over pieces and pawns. Knight forks are effective usually to further two other general principles:

Knight forks may be a single fork or a multiple fork. Examples are shown in the following two diagrams.

Consider Black’s multiple fork in Diagram N-IH above. Does White have any effective counterplay or counterattack? [The answer is fairly obvious and easy if you apply the basic principles and concepts, so I leave it to you to consider and work through without providing the answer; if stumped email me at marklowery@usa.net for my solution]There is a typical Knight fork check that occurs frequently against beginners, but which is fairly easy to prevent once the pattern recognition is learned. Below is an example against Black at c7 (a comparable one may occur against White at c3). Early castling prevents this Knight fork check. Developing the Queen Knight also opens an escape square or path for the Queen Rook instead of leaving it trapped on its home (back) square and coupled with castling connects up the two Rooks. An early pawn advance by Black to a6 (or by White to a3 in the comparable situation) to threaten capture of the opposing Knight also would force a retreat of the Knight and thereby prevent the Knight fork check situation.

In the Knight fork check situation against Black shown above (Diagram N-IV-C), Black made several errors leading to this position. Black is already down a Bishop, and White thus has a Bishop Pair on the board; but Black is a pawn up (White has material advantage by 2 points). Neither one castled, which was certainly odd given the position on the board. White has an isolated central pawn at d4, giving Black a slightly better pawn structure with the pawn chain at c7-d6 due to Black’s extra pawn. Black did a pawn advance to d5 breaking White’s pawn chain and allowing the above disastrous unstoppable Knight fork check position. Let’s look at the position just prior to the one shown.

Black missed the most obvious opportunity to protect against the Knight fork check situation
(…Na6), which would have protected White’s pawn at c7 from the Knight attack and opening the home (back) rank for White’s Queen Rook to move. 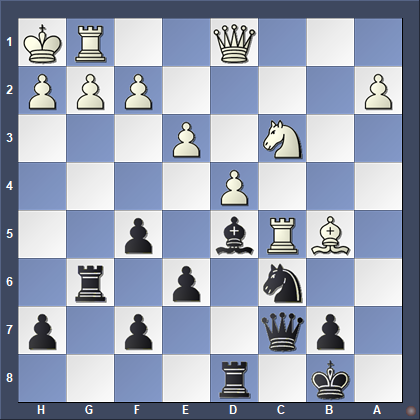 The Kumasi Chess Club Invitational sees some of Ghana's best go head to head against each other in a tournament that promises to be fireworks. Commentary by chess intense. https://t.co/MYbXpGlhtZ
#chess #asghanaianas #Fun # Education #commentary #stayathome #FIDE #youtube #itcanbe
View on Twitter
0
0

Dealing with #coronavirus in a tournament in Upper Franconia. The solution? Two-board #chess. https://t.co/5nHkuGa6cs
View on Twitter
2
0