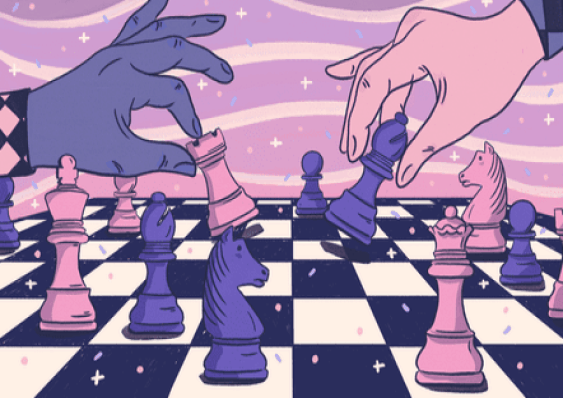 The following tutorial is quoted (with spelling intact; red text is commentary insertion by Mark a Lowery) and reprinted from The Ideas Behind the chess beginners tips, algebraic notation, Reuben Fine [McKay Chess Library] (3rd edition, 1989 Random House). The book is not an exhaustive treatment of the ideas behind various chess openings. Do not expect it to be so from the title. Rather, it is a foundational base upon which further exhaustive study may be premised, and concerns primarily the underlying base aspects of pawn structure. Originally written in the 1940s, the 3rd edition from 1989 does not generally go any farther than it did when originally written. Therefore, it is best to remember it is a foundational base unlike more modern books regarding pawn structure. More advanced treatment of pawn structure and a deeper level of delving into modern developments relative to pawn structure and the theories behind particular chess openings can be found in other more exhaustive modern topical books such as Pawn Power in Chess by Hans Kmoch.

A brief commentary is appropriate before proceeding to Fine’s concepts. Fine uses the word “Rules” relating to the ten in his list in his book, but they are stated in the “General Principles” section of his book.

James F. Howell (“chessteacher”) in the Yahoo Chess Groups suggested the folllowing formulation as a means to try to work around the confusion between Rules and Principles what one person calls a tule in chess, other sometimes call principles, and vice versa, which can be very confusing). He suggested also that the word “Guidelines” be used for certain concepts. I present them for your consideration as I think they are a good way to view things in chess.

Rule or Regulation – mean the same, and refer to the way the agreements we have as to what is legal, not legal, what makes a game drawn, how the pieces move [note: this comports with my suggested approach that “rule” and “rules” should be limited to the actual formal official rules of chess which govern and regulate the game of chess…for example those established by FIDE or which govern particular tournaments, etc.

Principle – Not to be confused with Rule
examples: King Safety, Develop pieces harmoniously, Show No Mercy.

You should use whatever formulation you find works best for you. Now for Fine’s Two Fundamental Concepts, 10 Rules, and 2 Questions.

There are two fundamental concepts in the opening:
development and the centre.

Development is getting the pieces out. The centre, consists of the four squares in the geometrical centre of the board. [d4, e4, d5, & e5]

The basic principle is that it is essential in the opening to develop all the pieces harmoniously and in such a way as to secure the most favourable position possible in the centre.

More elaborately, there are ten practical rules which are usually worth sticking to, though the more expert player will be aware of the many exceptions. These rules are:

2.   Wherever possible, make a good developing move which threatens something.

4.   Pick the most suitable square for a piece and develop it there once and for all.

5.   Make one or two pawn moves in the opening, not more.

7.   Castle as soon as possible, preferably on the [K]ing’s side.

9.   Always try to maintain at least one pawn in the centre.

10.   Do not sacrifice without a clear and adequate reason.

In number 10 we can further specify that for the offer of a [p]awn there must be one of four reasons:   (a) Secure a tangible advantage in development; (b) deflect the enemy [Q]ueen; (c) prevent the enemy from castling, either permanently or for several moves; (d) build up a strong attack.

Finally, it is worth remembering that there are two questions which must be answered for each move played:

2.   How does it fit in with the development of my other pieces and pawns?’

Any move which is in accordance with the basic principle is “normal”; any move which is not is “abnormal”. Thus 1 e4 which places a pawn in the centre and aids the development of the [K]ing-side, is normal, while 1 h4 which helps neither development nor the centre, is abnormal. Similarly, after 1 e4 e5, 2 Nf3 developing and threatening a centre [p]awn, is normal, while 2 b3 which develops a relatively unimportant piece, and does not affect the centre, is abnormal. The reader will readily think of many similar examples.

Sacrifices and gambits [essentially proceeding along a non-normal route usually more risky] sometimes seem to violate sound opening procedure. This is in a sense true, since every sacrifice requires special justification. However, it is a well-known and easily established fact that under certain circumstances extra material is useless when it is hampered by an immobile position. In such cases sacrifices are likewise perfectly normal. After improving your chess skills, you should start thinking about playing online chess for real money, just as you are playing online casino games. It is nice to know that you can earn some extra money by playing the game you love. We recommend you to try live dealer online casino games for the reason that they are the ones which bring you the most unique gambling experience because you can chat with the dealer and the opponent players on the table as well.

With gambits, the sacrifice is the essence of it all. Normal procedure must necessarily take that into account and accordingly a third factor is introduced. While this analysis is correct from a purely theoretical point of view, in practice it will be found that the centre is relatively of less moment, so that the essential question to be answered by both sides is: Is the advantage in development sufficient compensation for the material given up or not?   Normal moves in gambits are those which help to answer this question.