The second easiest checkmates involve using the Queen and the Rook without the aid of the King (hereafter “QRK”), and the Queen, Rook & King v. King (“QRKK”). In this part we look at QRK & QRKK. In Part 4, we will turn to examining Queen & Two Rooks v. King (QRRK).

For what should be fairly obvious reasons, combining the Queen’s great power and mobility (having the combined powers of a Bishop and a Rook) with the Rook’s significant power (ability to check, checkmate, & control files and ranks), logically one can conclude that checkmating the opposing King is an easy task in a QRK endgame. As when using the Queen and King to checkmate, the player must be observant to prevent stalemating the opposing player’s King. Even if the opposing player has a pawn or some pawns, and/or one or a couple of other pieces, on the chessboard, checkmating can be relatively easy to accomplish.

However, as the opposing player’s forces on the chessboard increase in number or increase from minor to major pieces, checkmating with just the Queen and a Rook becomes increasingly problematical and in some situations impossible. The difficulties that a player may encounter in a Queen and Rook situation often are much less when the player has Queen and two Rooks. Yet, like in situations where the Queen may be overwhelmed by a superior opposing force by combining tactical and strategic maneuvering action by minor pieces, or minor pieces and a pawn or pawns, the same applies for overwhelming the Queen and a Rook, and even a Queen and two Rooks. Naturally, the task often is much more complicated for the opposing player in these situations.

The focus for checking and checkmating successfully is primarily on three key elements: material advantage, positional superiority, and pawn structure.

In the third variation, Queen/Rook mates, there are two possible positions for the Queen versus the opposing King for each rank in which the Queen would be located (2nd rank or 7th rank) or each file in which the Queen would be located (a-file or g-file). Either (1) adjacent to the opposing King diagonally as in the above example and this works only for checkmates on one of the four corner squares, or (2) vertically aligned in the same file for checkmates on the 1st and 8th ranks, or horizontally aligned for checkmates in one of the wings (a-file or h file). Thus, in the above example Black could have positioned the Queen at a2 and still checkmated the White King (vertically aligned in the a file).

Now let’s step it up to a higher level of thinking to develop further the concept of move order & calculation within the framework of QRK mating patterns. Be assured that this exercise tests nothing but basic principles, although some have told me it has sorely tested their patience as well. In the following board position, Black to move. How many different move orders may Black make from this position to mate in two?

Scroll down a few lines for the answer.

Answer to the test problem:    36 possible move orders to mate in two.

The test problem was designed to test your ability to distinguish between forced checkmates versus opportunistic checkmates. A forced checkmate occurs when the opposing player cannot avoid checkmate no matter what he or she does. An opportunistic checkmate occurs when the opposing player moves wrong and gives a checkmate sooner than would otherwise be available. The test problem also required the ability to spot a possible stalemate. The two-move checkmates (forced and opportunistic) are shown in the solutions table below. The two-move simple checkmates (forced and opportunistic) are shown in the solutions table below. These are presented in order from Black initially moving the Queen to available squares in the a-file to which it may move and accompish mate, then to the available squares in the b-file, and so on across the files – c-file, e-file, g file, and the h file. The Queen cannot checkmate in two if it moves to d8 or f8, but has checkmate in three from those squares by moving the Queen diagonally (using its Bishop power) on the second move from those squares to one of the wings (a-file or h file) or a square in an internal diagonal line. These lines are reviewed after the solutions table below. If the Queen moved to c3, then it would stalemate Black’s King. Checkmate in two if Black moves Qb8+ is only possible if White moves Ka1, not Kc1. However, if White moved Kc1 then Black has checkmate in three moves: 1…Qb8+ 2.Kc1 Qb2+ 3.Kd1 and now Black has checkmate in one of three ways…Qb1# or Qa1# or Qd2#. Therefore, this is an example of an opportunistic checkmate situation, where White gives Black a checkmate sooner when White moves to Ka1 instead of Kc1 in reply to Black’s Qb8+.

Now let’s review the problem from the perspective of using the Queen’s Bishop power after moving to either d8 or f8.

Qd8: Using the a-file, these lines are available for checkmating on that wing:

Qd8: Using the h-file, these lines are available for checkmating on that wing:

Neither Qb6 nor Qc7 are options to checkmate in three if 2.Ka1. This is because 2.Ka1 Qb6 stalemates, while 2.Ka1 Qc6 3.Kb1 and Black cannot mate on the next move, and would need to make one extra move for mate in four. The available lines are:

Another general principle for checkmating is that as the number of moves to checkmate increases, then more likely than not a player will have to make an intermediate move to force the King to the checkmate square. In addition to the above examples, we saw an earlier example as the alternative line to the previous opportunistic checkmate example (1…Qb8+ 2.Ka1 Qb2#). Let’ look at another board position to see the employing of the intermediate moves to mate. Black has utilized the tactical and strategic principle of a Rook on the 7th rank to trap White’s King on White’s back rank (1st rank).

White can mate directly in several ways in two moves, for example: 1.Qe8 Kc1 (or Ka1) 2.Qe1#. White also can mate in three moves via multiple mating nets such as: 1…Qb8+ 2.Kc1 (if 2.Ka1 Qb7#) 2…Qb2+ (continuing the mating net and driving Black’s King to a “bad square” – the checkmate square d1) 3.Kd1 giving Black checkmate in one of three ways…Qb1# or Qa1# or Qd2#. As with the test problem, there are many mating patterns available.

However, let’s see White employ an intermediate move with White’s King, positioned at c7 blocking White’s Queen movement down the c-file , as part of a mating net.

We saw that making the intermediate move opens up the possibility for Black to blunder and stalemate White’s King. Limiting the possibilities that a player may blunder naturally will increase the player’s chances of winning the game. However, this problem is one of the simplest positions from which to checkmate. More complex ones with more pieces and/or pawns on the board might not be so easy. Understanding the use of intermediate moves could increase the player’s ability to mate by increasing the available mating nets in more complex positions. Also, some mating patterns especially involving the use of a Rook or Two Rooks, Bishops and/or Knights, in fact require the use of one or more intermediate moves to close the mating net and accomplish checkmate.

A player makes an intermediate move with a piece or pawn advance forcing the King to a bad square – which can be the checkmate square, or to gain some other advantage (e.g., gaining a piece and material advantage, opening a line, blocking a line, and so on), or to avoid a stalemate position.

Employing an intermediate move is very common not only in checkmating, where it is seen time-and-time again, but as a general tactical and strategic maneuver during the middlegame and endgame. More rarely, the principle may come into play in openings, especially non-traditional openings.

From the discussions in QKK and this part on QRK, we are able to discern two important general principles to keep in mind when maneuvering to checkmate the opposing King, and as importantly when attempting to prevent being checkmated.

Therefore, it is always best to try to checkmate in as few moves as possible.

Now let’s continue with examining the three-move checkmates from Qf8 for checkmates on the wings.

Qf8: Using the a-file, these lines are available:

Qf8: Using the h-file, these lines are available:

The above checkmates in three are not, in fact, all the possibilities. There are many more checkmates in three available from the problem start position. The above test problem then highlights quite well the great power of the Queen. Especially this is true when an opposing King is trapped on one of back ranks by a player’s Rook (positioned on the opposing player’s second rank (Black with Rook on 2nd rank for White with White’s King in back rank (1st rank); White with Rook on 7th rank for Black with Black’s King in back rank (8th rank). Similarly true is when the opposing King is in the a-file and the Rook is positioned in the b-file; or the opposing King is in the h-file and the Rook positioned in the g-file. The ability to develop large amounts of mating patterns and mating nets within two to three moves can be staggering to say the least.

The next level for Queen Simple Checkmates is Queen, Rook, & King v. King (QRKK). An example of this mating pattern was shown as the simple checkmate used in The Objective of Chess section. This variation utilizes the King in combination with the Queen and Rook, whereby the Queen and King take away the opposing player’s escape squares while the Rook delivers checkmate, or the Rook and King take away the opposing players escape squares while the Queen delivers checkmate. This simple checkmate type does not have to occur on one of the sides of the chessboard, although generally it easier to checkmate on one of the sides of the chessboard rather than on one of the inner or center files or ranks. Let’s view the QRKK simple checkmate from The Objective of Chess tutorial.

A bad day for Indian players - both Koneru and Harika got eliminated from the third leg of the Women's #SpeedChess Grand Prix. 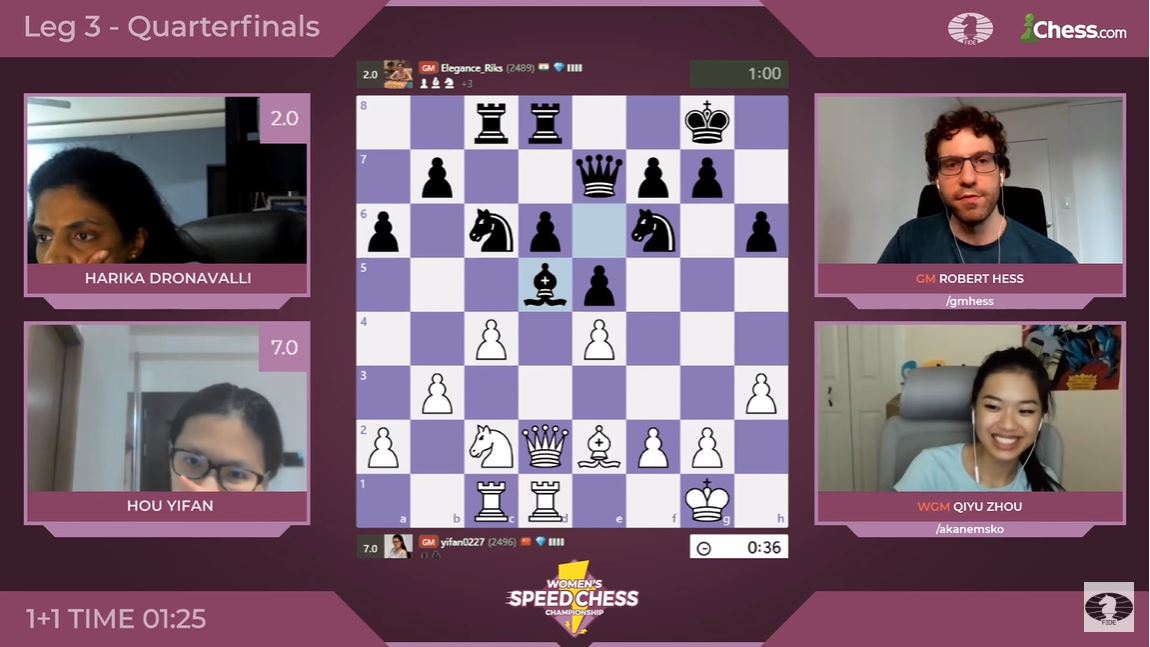 "If someone feels that the game of chess is worth wasting his life, it is definitely worth spending a few hours a day."

What's your thoughts 🤔 about this Thursday thought?
.
.
.
.
#RamaChess